Saturday 14th July 2018, another glorious weekend is upon us, and back to Cardiff Bay and the magnificent Millennium Centre, for two performances of another of my ultimate favourite stage productions in ‘War Horse’. After last weeks double show, I have to make the same decision and repeat the feat. When a show this good comes to a theatre so close to home, you have to make the effort to watch as many times as you are able to, for me that’s every weekend on its run in Cardiff. 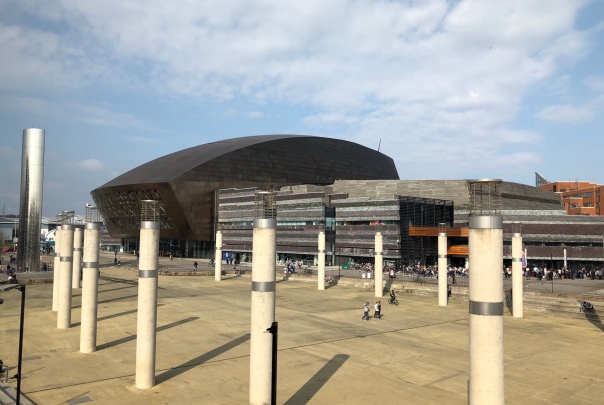 Today I’m looking at the production side of this Play, the technical aspect of putting this together is just phenomenal. The Horses look spectacular, the detail in their mannerisms, all achieved by the puppeteers running them (which after a while you actually forget they are even there) just blow you away, I could sit and watch them for hours.

The scenes during the war can be pretty harrowing in places, but that adds so much to the production, telling you how barbaric that part of world history actually was. The choreography during these scenes were superb, with actors placed strategically around the stage to assist with following scenes, seamlessly interwoven during the play. To get everyone in the right place at the right time is such a feat to accomplish, but this show gets it right every time I watch.

Another impressive technical assist for the show is the sound and lighting. From the start the lighting focuses on the spot you need to be looking at, mainly on puppetry and keeping you there for the remainder of the show. The sound is also exemplary, especially in the war scenes, with huge explosions, gun fire and a great musical soundtrack to add to the occasion. Put these two together and the whole story comes alive in front of you, almost transporting you to the harrowing scenes contained in the War itself. I must also mention the amazing sound the horses produce throughout the play, even the hooves seem real as they move around the stage, along with the other horsey sounds made by said cast.

The whole show is sheer brilliance from start to finish, and I still want to watch over and over, next weekend I will get the chance to do it all again.