Saturday 7th April 2018, and after a really difficult week in work, I’m back at the Millennium Centre in Cardiff Bay for two performances of Matthew Bourne’s Cinderella. Another milestone for me this weekend, is tonight’s show will be my 450th performance of a show. For the record I’ve only seen 161 shows, but seen those 450 times (365 of those at the Centre), so another special day today.

For today’s matinee Cordelia Braithwaite will be playing the role of Cinderella, a beautiful dancer with so much grace and elegance, throw in the brilliant Liam Mower as the Angel and Dominic North playing the Pilot and you have the perfect trio for such a fabulous performance. Again the whole Ensemble just blew me away, the dancing was just impeccable, combining fabulously with the Prokofiev music at the heart of the show.

For the evening show (my 450th) we have Ashley Shaw as Cinderella, Andrew Monaghan as the pilot with Paris Fitzpatrick as the Angel. Once again the dancing from Ashley is spectacular (as with Cordelia in the matinee), enormously impressed with both leading ladies. The standard of dance from both shows was outstanding, and a fabulous opportunity to watch them today, before they head off to Liverpool.

The set, lighting and sound effects were excellent, probably Matthew’s greatest Ballet to date, so moving, and bringing a classic up to date with a Second World War theme was a stroke of genius, that only he could possibly get away with. I also love the costumes for this production, just adds that 1940’s hit of reality to this show.This really perked up a bad few days for me, bringing my Saturday to an amazing end. 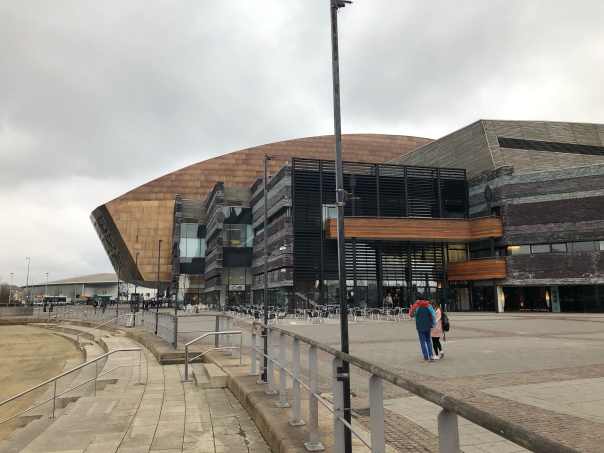 Saturday 18th March 2017, and after a two week break (although it felt like a year, with no show) I’m back at the Millenium Centre in Cardiff Bay for two performances of Matthew Bourne’s The Red Shoes. I’m so looking forward to this, I’m a big fan of his work, having seen the last few touring shows at the Centre, which were totally brilliant. From the reviews I’ve seen for this I expect I’ll be thouroughly engrossed for both performances. The show has been nominated for two Olivier awards for its run at Sadlers Wells, so good luck for that too.﻿

So impressed with this show, the cast were immense, the set and lighting were excellent, beautiful costumes enhanced the stage production and the music was superb. The whole show was just phenomenal. I couldn’t keep my eyes off the stage for even a split second. It was so graceful and beautiful I have to say I managed a few tears in various sections throughout the whole performance.

Ashley Shaw as Victoria Page and Chris Trenfield as Julian Craster are just magnificent, with Sam Archer as Boris Lermontov, Liam Mower as Ivan Boleslawsky and Anjali Mehra as Irina Boronskaja also dancing to perfection. During the group dances it was difficult to focus on one dancer,as everyone in the whole cast just put in tremendous performances, culminating at the end of act one with the totally entrancing Ballet of the Red Shoes. This was so beautifully choreographed it brought a tear to my eyes (as usual), mainly due to the fact I couldn’t stop watching Ashley (and Cordelia for the evening) with her magnificent dancing, costume and the wonderful Red Shoes. For me the highlight of the whole show.

A few changes for the evening performance with Cordelia Braithwaite as Victoria and Nicole Kabera as Irana. And may I say both of them were just superb, as you would expect. The performances today were both so graceful and beautiful at the same time, and I still had tears in my eyes for both.

Matthew Bourne has once again put on a fabulous show, my only complaint is that I wish it was longer. I could have sat and watched all day. I’m glad I have got the opportunity to watch it again this evening (thinking about it, I say this after every show).

I’m now starting to enjoy all forms of live theatre, I’ve fallen in love with Opera, Ballet, plays and of course Musicals. I’m at the stage of my theatrical experience where I can now profess to wanting to watch everything I possibly can. With so many quality shows coming to Cardiff over the next few years, I’m so spoilt for choice.